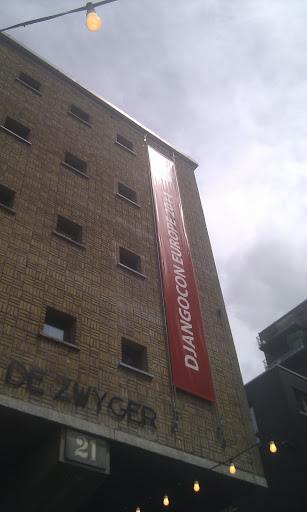 Last week I had a great time in Amsterdam at Djangocon.eu, and many thanks to everybody involved in the event, especially the organisers.
Many useful talks and it was energizing to see an event and platform growing as Django is doing, with lots of young new developers coming on board.
I gave a short talk myself, about how I am using Django at the University of Bristol as an ideal lightweight agile framework for glueing together components that have traditionally been labelled as 'Enterprise' architecture. Traditionally SOAP web services and 'Business' objects, are sold as the necessary integration components. Complex environments and problems requiring complex (commercially named) technologies as solutions. The gist of my talk was that just because it is a complex problem it doesn't need a complex solution. Integration technology should be as simple and decoupled as possible to be robust.
This is really just the old engineering principle, KISS (Keep It Simple Stupid). Examples in IT trends are the decline of SOAP in favour of restful approaches, the rise of the cloud - and social media over more workflowed institutional CMS. NoSQL replacing large relational databases. Simple component services perhaps tied together just with javascript and JSON, rather than complex integration APIs and XML, tightly coupled to relational schemas.
Applying the same KISS ideals to the world of python, then it appears similar lessons are being learned. From a recent blog posting, by Mikko Ohtamaa, Plone is attempting to shed complexity, whilst as Martijn Faassen alluded to in his talk - zope found that a full rewrite to add java style interface adaptor patterns via XML, to zope's already overly full basket of patterns, was a step too far.
To finish Russell Keith-Magee gave a Roadmap talk, appealing to developers to get on board, and for Django to not suffer from a clique mentality. The approach of tell us where you want Django to go, and if you help out, it will. In response, I sincerely hope that Django remembers that KISS is its mission, and makes it a point of principle to not increase its core size. If anything components such as the admin should probably be taken out to develop separately - along with any other more CMS specific components. Storage too, could be pluggable as relational or no-rel, etc. with just SQLite by default.

PS: For those that attended, appologies over my talk. My netbook proved to have been rather too bashed around by the kids, and the graphics card couldn't cope with the multi-head projectors. Hence I had to borrow one from the audience, so an already rather ambitiously squeezed talk had to be skipped through in even less time. I hope the result (and diagrams) were not too impenetrable, maybe next time I can deliver something a bit clearer!
Posted by Ed at 21:57 No comments: